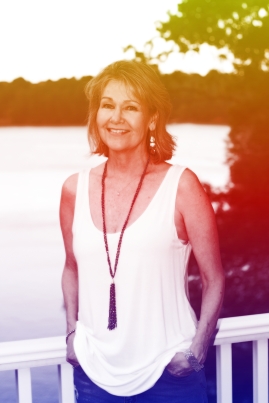 (Photo: Me, with special glow filter and sunlight effects.)

I have a life coach. I know, very trendy, but this woman is the perfect mix of intelligence, spirituality, and humor. She’s big into A Course in Miracles and has written some amazing books that I reference from time to time. ANYHOW, I told her about a spiritual experience I’d had that I’ve never written about, except in a memoir that I may never publish, and she believed me. Unreservedly.

And since she believed that, I told her another secret. I told her that from the time of that breakthrough, I’ve been able to do “readings,” which I have to put in air quotes because I’m not that comfortable with the word. Same goes for “psychic” or “medium.” In truth, I’m fine with those words applying to SOMEONE ELSE. And that’s part of the reason that up until recently, only a handful of people knew anything about this. At the urging of my coach (and after another year of putting it off), I did some readings for people in a spiritual group she has in Denver. It went very well. More importantly, it was fun and energizing. She’s also encouraged me to reach out to the world in general, because she sees these readings as healing, and they have been, both for me and other person.

The best way I know to describe what happens is that my mind and someone else’s become joined in a kind of communion. It’s almost like the feeling I used to get when I had a drink with someone. One drink in, and we suddenly connected on a deeper level, like we’d found some new way to communicate. I loved that feeling. Friends appeared out of thin air, and social anxiety was something that you could only imagine sober.

With all this in mind, I’m reaching out to do a few practice sessions. A year ago, I did one for a lovely woman in Australia. It was such a wonderful experience that I’m going to give it a try again.

SO! If there are any brave, open-minded souls out there, send me an email. (Of course, there is no charge for these readings. It’s just for fun and so that I can tell my coach I finally did what she has been asking me to do for years.)

Wow — one more of my secrets out there in the world. It feels good.

Please use this email:   shawnacarpenter05@gmail.com

Or just reach out in the comments.

After a difficult marriage and divorce, I thrived on anger. Somehow, the anger felt like power in a situation where I had very little of it. It wasn’t until I read A Return to Love that I knew there was a downside to what I saw as perfectly justified anger. Here’s a great article from The Elephant describing one women’s anger toward her father:

The Danger of Justified Anger.

(You may have to give an email address to read articles from The Elephant.)

A Parenting Site for Every Type of Family
Blog - Authentically Amanda