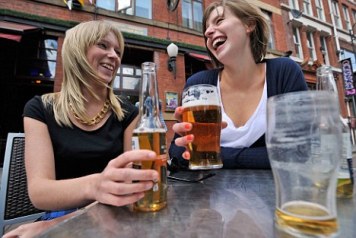 In any relationship, there is an unspoken promise. I will play my part, and you will play yours.

Negotiating friendships is a huge part of the struggle to quit drinking. In the beginning, those drinking friends are by far our closest, because we have built a life around those who drink like we do. I actually had no close friends who were non-drinkers by the time I quit. What could they offer me? Their very existence was a reminder that there were people out there who somehow survived without drinking, and maybe even disapproved of my own propensity to gravitate toward the bar.

But those drinking friendships are magic, aren’t they? You’re always sneaking out for a quick drink together, and you come to associate the warming ease of alcohol with their golden camaraderie. They are so much fun! And so are you. You are both funny and witty, and totaling willing to speak intimately the minute you sit down. It’s wonderful … almost like love itself.

But what happens after you’ve stopped drinking?

In the beginning, you have to avoid these people like the plague because the lure of that camaraderie is too much to withstand. It’s too hard to sit there, soda water in hand, and see the disappointment in their eyes. It wouldn’t matter if you told them that one more drink would send you into liver failure. They still feel betrayed, because they are losing something too. It’s like your breaking up with them, and they know it. They need the magic as much as you do.

I drank a thousand times over to make someone else happy. To ease their discomfort. It didn’t matter how many days I’d put together or what kind of strategy I’d come up with. I bailed on myself at the outset, drinking to keep the status quo … playing my part in the relationship. Becoming who they knew me to be, and who I wanted to be in their presence.

Because who are you without your friends? It’s not as if you drank around them all the time, but you are not the same person while continuously drinking. You are someone else. You are hiding the biggest part of yourself behind a huge mask of attractiveness, social ease, and false bravado.

I just spent this weekend renegotiating a friendship when a couple visited my husband and me while on vacation. I had only seen the wife, one of my best friends, once while not drinking because we no longer live close. The time before had been so difficult. I was newly sober and still waffling … should I or shouldn’t I?

It was different this time, however. I made no apologies and no speeches. I made no excuses about health kicks or antibiotics. I just didn’t drink.

“You aren’t going to make me drink alone again, are you?” asked my friend, with a clear look of disappointment.

My daughter laughed a little uncomfortably. She’s too smart to be pressured into drinking.

So, as the only nondrinker, I stood in bars, strolled beautiful sidewalks, and sat on sunlit balconies with my friends, all completely sober, except for the occasional sugar high.

And I could meet everyone’s eye completely. I played no part but my own.

Here I am, I thought. Not really who you knew at all. And I am willing to be uncomfortable and awkward and unsure of what to say next. Because this is who I am, and I don’t need to be “on” for anyone anymore. But I love you, just the same.

Be happy for me.

Or don’t be. It makes no difference now.

Wow!    I just read the perfect post from Free Falling Into a Sober Life on why this election has been especially difficult for many people, especially  me. It makes a great connection between drinking and what is happening politically.

This is a must read!

the pursuit of meaning